A couple weeks ago philosopher Stephen Maitzen left three comments to my article “Must existence be everlasting to be meaningful?” Over the week that followed I offered extensive critical engagement with Maitzen’s position. In this post and the next I’m going to circle back to the questions/comments themselves and engage them in two steps. In this article I’ll discuss the concept of inherent value which Maitzen thinks is problematic. And then in the next article I’ll go back on the offensive by targeting the implications of Maitzen’s own position.

Second, how can the worth of a human being, or of human beings in general, be inherent if (as I assume you were suggesting in earlier posts) it comes from God? If their worth has an external source, it’s not inherent. If it’s inherent, it arises from their intrinsic properties (rationality, self-consciousness, or the like), and they’d have it regardless of how they came to exist.

Third, theism says that all human beings have equal and nonzero inherent worth: Jonas Salk and Joseph Stalin, despite their differences, have equal inherent worth because they’re equally God’s children. But God’s parentage couldn’t give them inherent worth, and nothing could be more obviously false than the claim that they have equal nonzero worth, so it’s another reason to regard theism as false.

In my responses to Maitzen I focused on the first comment. However, I didn’t do so in the way that he obviously wished, i.e. with me shouldering the obligation of providing a set of properties exemplified by human beings in virtue of which they enjoy a unique status. Instead, I argued that Maitzen doesn’t himself live in accord with his own stated position. You might be tempted to reply: “Who cares?” But ask yourself this: If the minister of food safety went on television following an outbreak of BSE declaring the safety of eating ground beef, and yet he refused to eat it himself, what would you think of his declarations?

But I’m getting ahead of myself. I really want to reserve my critique of Maitzen’s inconsistency for the next article. This article will focus on his comments on the notion of inherent value.

Maitzen charges in his second comment that human beings cannot have inherent value if that value consists in their having been created by God. Why? Because then the value is derived from an external source, viz. God, and thus it is no longer inherent.

But wait a minute. Who says inherent value cannot be derived from an external source? Here is a dictionary definition of “inherent”:

“existing in someone or something as a permanent and inseparable element, quality, or attribute.”

Are there objects which have a permanent attribute of value in virtue of having been created by someone? 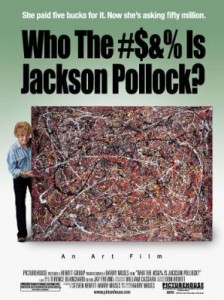 Consider the documentary “Who the #$&% Is Jackson Pollock?” The film centers on a painting that is purchased for a few dollars at a yard sale which, it turns out, just may be a work of Jackson Pollock. If it can be established that the painting does in fact have that provenance then its value will be in the stratosphere. If it lacks that provenance then its value will be negligible. In this case the value of the painting is tied essentially to the creator of it rather than to any merit in the painting itself. (At the very least, the origin of the painting is an essential part of its value.)

But wait a minute, haven’t we confused the value of something with its price on a market of exchange? The fact that a Pollock painting may net a high price in virtue of its origin doesn’t mean it has a high objective value. If the work has merit, it has it whether Pollock painted it or not. Remember Oscar Wilde’s famous definition of a cynic as “A man who knows the price of everything and the value of nothing.”

That is a fair point. The price of an object may be intimately tied to the creator of the object, but who is to say the value of an object is so tied? This may be true generally, except that we’re not talking about just any creator here. Authorship by an artist may in itself be insufficient to imbue inherent value (may), but I see no reason to think that God’s unique creative act would not be in itself sufficient to bestow inherent value upon the object so created.

To sum up, even if human beings have no unique properties that set them apart from all other creatures, they still could have a unique, inherent status in virtue of the relationship they bear with their creator.

Inherent value in terms of an (undefined) set of properties

For the sake of argument let me grant that position. Even if there is a set of unique properties the human species exemplifies in virtue of which they have value, our recognition of their inherent value does not depend on our ability to articulate what that set of properties is. This was the point of the argument I presented in “Rosie, don’t get in the elevator“. In that illustration I pointed out that a person can perceive danger in one situation that is not present in another situation even though they cannot articulate the difference between the two situations. In a similar manner, a person may perceive a unique value in human beings not possessed by other species without being able to say precisely what that status consists of.

Human beings may not be able to provide a comprehensive set of properties that human beings exemplify in virtue of which they are uniquely valuable. But that hardly warrants the conclusion that there is no such list. One only needs to consider the heights and depths of human culture to get a sense that healthy human beings who develop normally are capable of extraordinary actions (good and bad).

Admittedly many attempts to identify precisely what makes human beings unique have come up short. We might say it is language, except that some other animals have limited linguistic abilities (although none, to my knowledge, has as yet produced a Shakespeare). So we might venture to say it is tool use except that some animals are rudimentary tool users (although none that I know of has developed something to rival the Space Shuttle). Then we might venture to say it is self-consciousness except that some animals appear to achieve self-consciousness (though none has achieved explorations of the self to rival Douglas Hofstadter’s I am a Strange Loop). And of course there are human persons who lack language, the ability to use tools, and self-consciousness, yet are no less human and valuable for that lack.

Like a mysterious syndrome with fuzzy boundaries the mystery of human value captured in that phrase imago dei may as yet elude us, but fortunately our recognition of human value is not dependent on our ability to articulate the necessary and sufficient conditions of the divine image.

In short, I believe that a Christian theist is amply justified in maintaining a twofold sense of the inherent value of human beings over-against other creatures both in terms of divine origin and properties exemplified even if s/he cannot as yet provide a comprehensive list of the latter.