When I was growing up I used to search the large tract rack in our church’s foyer. The rack had hundreds of tracts stuffed together in a haphazard mess. The goal of the search? The coveted Chick tract.

Jack Chick was (and is?) a mysterious, reclusive individual who reportedly lived (lives?) in Southern California and spent (spends?) all his time drawing brash, in-your-face, fundamentalism-on-steroids panel cartoon tracts. To be sure, these weren’t playing to the Dennis the Menace and Ziggy crowd. They were hard hitting screeds of fundamentalism. (Check them out at www.chick.com. And check out the smiling kind looking people at the top of the web page. Are those really consumers of Chick tracts, or are they stock photos? Hmmm.)

Even as a teenager I winced at the potential damage that Jack Chick tracts could do. But as collectors’ items they couldn’t be beat. I would have traded all the orange Four Spiritual Laws tracts in Canada for a single copy of Chick’s abrasive master works.

Chick has many greatest hits in his classic list of tracts as he takes on all comers — gays, Catholics, Muslims — but none surpassed the gritty brilliance of “Somebody Goofed!”, a depiction of a guy who ends up being tricked — tricked — into choosing hell. I’ve included the main panels of the cartoon below so you get a sense of the storyline. 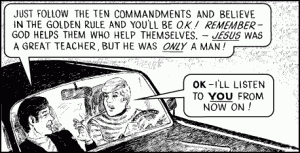 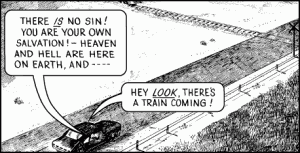 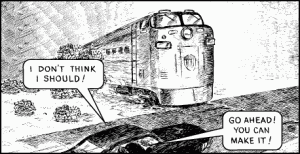 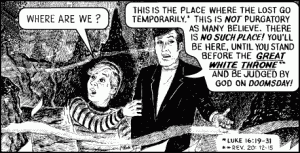 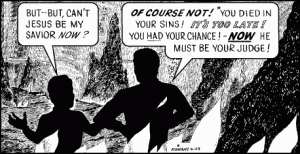 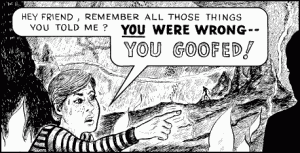 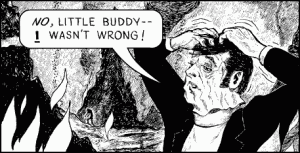 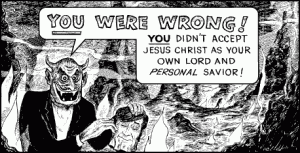 Powerful, no? As you read, you can practically smell the sulfur.

Of course, the theology is absolutely horrendous. But that’s part of the charm of a Chick tract. It simply goes off the deep end.

You also have to love that “natural” dialogue. “Okay, I’ll listen to you from now on.” Yes, that’s just the way teenagers talk.

Most importantly however, a Chick tract can be a powerful pedagogical device which helps us raise and consider some difficult questions.

Christians everywhere will reject the notion that people can be tricked into hell. But the sense of a “trick” cannot be avoided simply by rejecting the notion that demons go around wearing elaborate rubber masks and saying “Na-na-na-na-na-na!” once they’ve got you killed.

To see what I mean consider this wonderful Ally commercial:

So the banker asks the kids “Would you like a pony?” The one child gets a toy pony and is content. Until she sees the other child receive a real pony. “You didn’t say I could have a real one” she protests. “Well you didn’t ask” the man replies.

And then the narrator pipes in with his moralizing commentary: “Even kids know it’s wrong to hold out on somebody.”

To hold out on a person is to withhold important information from them, information which would have changed their beliefs and/or behavior had they only known it.

The abiding concern that the Chick tract raises concerns this problem. Does God hold out on people when it comes to hell?

We can think of this both in terms of propositional knowledge and the knowledge of acquaintance (that is, experiential knowledge). However, I’m going to focus on the latter.

Consider for a moment the question of torture. Dick Cheney’s policy change on this matter following 9-11 (so memorably and mournfully depicted in the documentary “Taxi to the Dark Side”) prompted a national debate on the role of torture in interrogation. The practice of waterboarding quickly moved into the center of discussion. Is waterboarding torture? Defenders and critics of the practice lined up on both sides. But few of them really knew what they were talking about.

Initially Christopher Hitchens was just another one of those pundits offering his opinion from the comfort of his oak desk. But then he agreed to be waterboarded so that he could understand it from the inside with a knowledge of acquaintance:

After the experience Hitchens observed how his thinking had changed as a result: “I think I sympathize a good deal more because as a result of this very brief experience if I do anything that gets my heart rate up and I’m breathing hard and I’m panting. I have a slight panic sensation that I’m not really going to catch my breath again.”

Consequently, the question “Would you submit to being waterboarded?” meant something very different to Hitchens after he had a taste of the experience compared to before. Where he would have said “Sure, I’ll give it a try” before, the overwhelming answer afterward was “Most certainly not! It’s torture!”

If you asked somebody “Would you submit to being waterboarded for five bucks?” knowing the horror of the experience that they do not, you’d be holding out on them. You shouldn’t give them an option that you know they’ll regret. It’s wrong to hold out on somebody whether it involves a good like getting a pony or a matter of suffering like being waterboarded.

It seems very plausible for a Christian to believe that a maximally good God will not hold out on anybody. Thus, if a person ends up in hell it is because they chose hell with a knowledge of what they were choosing.

But this presents us with a dilemma. Nobody would choose waterboarding if they understood what they were choosing. And if somebody did choose waterboarding after having experienced it, you would probably not respect their request, for you’d think no rational person would make such a request.

The suffering of hell is supposed to be multiple orders worse than the suffering induced by waterboarding. If a person cannot appreciate the horror of waterboarding until they’ve tasted it, how can they appreciate the horrible suffering of hell? Clearly they can’t. (Indeed, theologians have often stressed that hell is worse than the metaphors we have in scripture, and yet even the metaphors utterly transcend our grasp: what is it like to be burned alive literally?)

So here is our dilemma. God cannot be holding out on anybody. But nobody would choose something like hell for themselves if they had all the information they require to make an informed decision. And if, per impossibile, somebody did make such a decision, we wouldn’t respect it anyway, for we’d think surely they are not mentally fit to make such a decision.

That’s why I like Jack Chick tracts. They start off with memorable absurdities, but those absurdities lead us into a deep, dark dilemma, and a very difficult and interesting conversation.