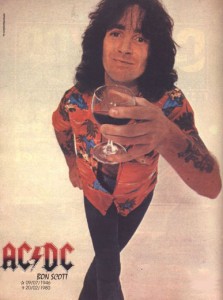 Bon Scott, the immortal first lead singer of AC/DC, has impeccable rock and roll credentials. Widely considered one of the greatest frontmans in history, he solidified his resume by becoming a martyr for the God of Rock when, in February 1980, he died by choking on his own vomit after a night of binge drinking.

Season ticket on a one-way ride

Asking nothing, leave me be

Taking everything in my stride

Ain’t nothing I would rather do

My friends are gonna be there too

I’m on the highway to hell

If ever there was a debauched rock singer who made his intentions clear, surely it was Mr. Scott. His untimely death merely sealed the deal.

But did Bon Scott really want to go to hell? To decide that we have to get beyond the surface of his words. And immediately we encounter a complication in the way Scott describes hell, i.e. as a big party. This is very different from the biblical descriptions of a furnace, outer darkness, and a lake of fire. That fact presses the question.

Consider this illustration. When I was a kid there were some Saturday mornings that I would begin to think that I might want to be a soldier when I grew up. Usually the feeling followed an episode of the G.I. Joe cartoon.

On the other hand, a couple of doe-eyed newlyweds cannot imagine what it really means to confess “for better or for worse” when they walk down the aisle. They begin to get a better sense when, three years later, they are facing bankruptcy after an unexpected diagnosis of multiple sclerosis.

Looking back we can say that those newlyweds really didn’t have a clue what they were getting themselves into. But that doesn’t mean that they can dissolve their union and go their separate ways. Till death do us part and all that.

So maybe Scott didn’t have a clue what he was asking for, but maybe he asked for it just the same.