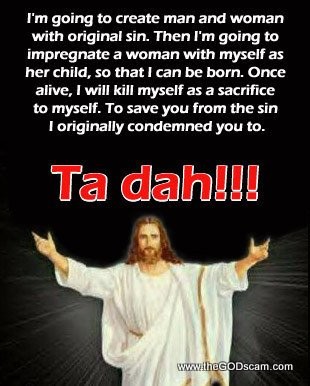 Earlier this week The Atheist Missionary posted a link to this parody of Christian doctrine.

“Any belief system can be reduced to a postcard size of seemingly arbitrary, absurd (and in the case you provided, profoundly distorted) statements which make the belief system look absurd.

“This reminds me of a great quote by Hilary Putnam: “Any philosophy that can be put in a nutshell belongs in one.” The same goes for postcard size summaries of complex belief systems.”

davidstarlingm agreed, pointing out a postcard-sized parody of naturalism he had seen at a friend’s Facebook site:

Despite these problems, several people expressed their sympathy for this postcard. Jerry Rivard speaks for the group:

“I had basically the same thoughts about this as Robert and Beetle, and probably TAM.  I think we can all recognize the mocking tone, and the details are deliberately made to sound silly.  But where is it factually wrong in describing Christian beliefs?” (emphasis added)

Let me point out two levels of error with the postcard.

To begin with, the postcard is a collection of false statements.

“I’m going to create man and woman with original sin.”

This is false. According to Christian doctrine God didn’t create human beings with original sin.

“Then I’m going to impregnate a woman with myself as her child, so that I can be born.”

False. This postcard describes a monad that is foreign to Christian belief.

“Once alive, I will kill myself as a sacrifice to myself.”

False again: The whole monad thing, as well as the fact that there are many theories of atonement ranging from penal substitution to Girardean theory.

“To save you from the sin I originally condemned you to.”

This is false because it depends on a false statement that God created human beings with original sin.

The idea of a postcard error

Here is where the apologists of the postcard enter in saying things like this: “Okay, he didn’t create them with original sin. But he created them knowing they would sin. Isn’t that the same thing?”

“Fine, he didn’t kill himself. God the Father sent the Son. But then the Trinity doesn’t make any sense either.”

Here’s the problem. The minute you move beyond the rank falsity of the original statement to something Christians actually believe, you open onto a wide vista of theoretical explanations of the doctrine.

But what about David’s friend’s summary of naturalism? When it comes to that description their interest is piqued. They have all sorts of interesting explanations for how something came from nothing uncaused. They have the greatest patience and ingenuity as they explore ways that we moved from hydrogen to Handel. They may give up objective meaning, or free will or morality along the way, but it was worth it. With a few tweaks of the verse they confess with the Apostle Paul:

But whatever were gains to me I now consider loss for the sake of naturalism. What is more, I consider everything a loss because of the surpassing worth of knowing the universe…

The air is now fogged up with irony as thick as cheesecake. As Richard Lewontin famously observed in a much reprinted review of Carl Sagan’s book The Demon Haunted World:

Carl Sagan accepts, as I do, the duality of light, which is at the same time wave and particle, but he thinks that the consubstantiality of Father, Son, and Holy Ghost puts the mystery of the Holy Trinity “in deep trouble.” Two’s company, but three’s a crowd.

This ain’t rocket science. The deepest issue is really nothing more than the Golden Rule: extend to other belief systems the same careful consideration and nuance that you extend to your own.