Like many people, Brap Gronk is incredulous to (or at least skeptical of) the idea that human beings might form properly basic beliefs about God. Brap writes:

“But how does one form beliefs about God’s nature, plans and purposes without some input from the Bible or from others who have thought about such things and communicate their own beliefs?”

People don’t need to read the Bible to know God exists. Perhaps you’ve heard the term “homo religiosus”, a term that is meant to signify that human beings are by nature religious. In this context I take the term religious to mean “prone to recognize transcendent meaning and significance.” In “Scientsts who praise the universe” I provide  evidence for that religious impulse among “skeptical scientists”.

(1) Is there something transcendent that we are perceiving?

As with every other area of perception, the first question is answered long before we answer the second one. (That’s one reason why epistemic externalism, an approach to epistemology that prioritizes (1)-type questions over (2)-type qustions, has gained wide acceptance in contemporary epistemology.)

From the Christian perspective human beings were created to form immediate beliefs about God or the transcendent in a large range of experiences. These experiences can occur in all sorts of situations, as surely among those “unchurched” as those formed in a specific religious community.

What’s the difference between the two? Well have you ever gone backpacking with a geologist? You both look at the same geological features, you’re both perceiving them. But she has been trained as a geologist in a particular doxastic community so that when she encounters those features she can read them as telling a story of glaciation and earthquakes and subduction. To you they look like a jumble of impressive rocks.

Or perhaps you’ve sat at a coffee shop with your friend who speaks Hindi. At the next table there are a couple guys having an intense conversation in Hindi. You both hear the conversation, but to you it is a wall of impenetrable sound, while to your friend it is a serious of humorous anecdotes and he has to pinch himself from laughing out loud. What’s the difference? He was formed in a community to speak and understand Hindi.

If God is perceptible in the world then certain individuals may have been formed in doxastic communities in a way parallel to the geologist or Hindi speaker such that they can interpret the same experiences that others perceive but only as a jumble of impressive rocks or a wall of impenetrable sound.

A case in point. Last year I blogged about the time rock star Burton Cummings walked into St. Thomas Church in New York and sensed a presence there. Burton was totally caught off guard by his experience but in his view he clearly picked up or sensed something unique in that church. What was it? Burton didn’t have words to describe it. It was like the non-geologist trying to read an awe-inspiring landscape or a non-Hindi speaker hearing the sounds but not the speech. Burton fumbles through that experience in his hit 1975 song “I’m Scared“.

A theist, or a Christian, has a prior interpretive framework, and if that individual is correct then he will be perceiving more fully that which Burton grappled with but couldn’t quite grasp. What Burton describes sound a lot like what Rudolf Otto called the “mysterium tremendum et fascinans” (a fearful and fascinating mystery). It is a direct encounter with the transcendent source of being that leads us to worship.

What role, if any, did the church play in all this? That which is awe-inspiring leads us naturally like sign pointers to that which lies beyond, to that mysterium tremendum et fascinans, that which those with a Christian language call the triune God. St. Thomas Church in New York is an architectually impressive structure which is, as such, a more fitting conduit for the perception of the mysterium than, say, the streetfront Baptist congregation. This is one of the reasons that I am a huge fan of great works of ecclesial architecture, becaues they become ways to perceive the mysterium much like a radio tower picks up radio waves. 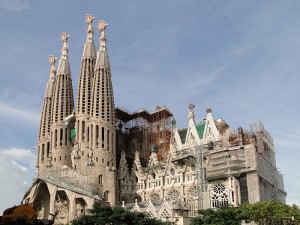 My favorite church building in the world is the Sagrada Familia (Barcelona, Spain) which has been under constant construction for over a century and will hopefully be finished in the next few decades. When it is completed its central Tower of Jesus Christ will stand at over 170 meters tall. I think of a building like this as akin to a radio telescope which amplifies greatly the transcendence that inheres in creation so people are more apt to identify it and undergo the kind of perceptual experience that Burton Cummings described.

Those scientists who revert to the language of reverence and worship when they study the most awesome aspects of the universe are merely proving my point. When we encounter the grandest manifestations of the material and cultural dimensions of the universe we are perceiving sign pointers of the God that stands beyond them.