Earlier today The Atheist Missionary posted a comment which offered a link to a postcard length caricature of Christianity. The comment came replete with TAM’s own self-satisfied commentary:

Atheists look at something like this and chuckle. I’m not sure what goes through the minds of Christians but there must be a small bit of cognitive dissonance. It only goes to show what you can be led to believe if you’ve been fed it since birth.

I responded with puzzlement. How is it that TAM can be as well read on Christianity as he reports (and I have no doubt that he reports accurately), and how can he be so intelligent generally (he is a highly trained professional in his field and a prolific blogger/tweeter), and yet at the same time he posts this kind of irresponsible drivel? 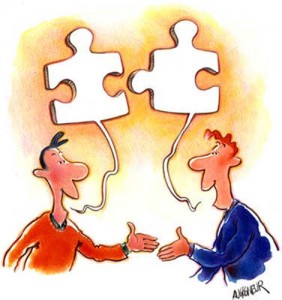 My puzzlement is actually a good deal deeper. You see, TAM reviewed my book You’re not as Crazy as I Think on at least two separate occasions and he gave the book glowing reviews. That book is focused on a single task: getting Christians (and everyone else) to take the views of other people seriously for the sake of truth and the open society. TAM seemed to resonate with this message deeply. And yet, since reading the book he continues to perpetuate the same tired secularist aphorisms. It’s like a conservative giving a glowing review for Noam Chomsky’s Hegemony or Survival and then voting in the primary for Rick Santorum. I just don’t get it.

Anyway, here is a passage from the above mentioned book I wrote in which I give a reminder of the importance in learning to move beyond caricature to genuine understanding:

It is tempting to think that those who hold beliefs radically different from our own are just plain stupid.

How shall we respond to our own incredulity [at the other]? Should we just sit there, looking stunned at one another? One way to break the silence is through mockery or caricature. For instance, there certainly seems to be some caricature in Del Tackett’s description in The Truth Project of the atheistic view of the human person as “imago Goo” (as ooposed to imago Dei, or image of God). Although this is clearly a bald and uncharitable interpretation of the atheist’s position, it is rhetorically powerful when delivered to a receptive audience. And rest assured, once the insults have started, the atheist will have an equally lowbrow insult ready to retort to the devout Christian. Perhaps something on the level of “Faithhead! Faithhead!”

Suddenly we find ourselves in a standoff in which both the Christian and her interlocutor are convinced the other person is crazy [or at least suppressing severe cognitive dissonance], even as each reinforces her perception with a range of caricatures. The only way to break this kind of standoff is by taking the risk of lowering our own rhetorical guns. What if we opted to restrain ourselves from cheap shots and caricatures and instead attempted to understand views that strike us on first blush to be utterly implausible? What would happen if we refused to dismiss our interlocutor as cognitively deficient and instead tried to listen to the other person from “inside” her beliefs, as far as we are able? Even better, what if she then extended the same courtesy to us? (You’re not as Crazy as I Think (Biblica, 2011), 89, 90).