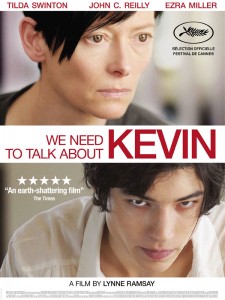 Jerry Rivard asked why the interest in psychopaths. The initial catalyst was a new film I have yet to see: “We need to talk about Kevin” starring Tilda Swinton as the shattered mother of a psychopath who commits a massacre at his school.

Extreme events like that narrated in the film are rare. But psychopaths are not. A reliable estimate would place the number of psychopaths in the general population at a little under one percent of the population: or about three million people in North America. A relatively small percentage ever commits a violent crime, but all are victimizers incapable of empathizing with others. And they also appear to be unable to reform. The most successful attempts at therapy aim to appeal to a psychopath’s own self-interest: it is best for them that they not constantly treat others as objects to be manipulated at will. In other words, nothing appears to break through to them. The lights are on but nobody is at home.

I recall here a riveting scene in the documentary “Grizzly Man”. You know the tired “found footage” sub-genre that was kicked off by “Blair Witch Project”? Well “Grizzly Man” consists of real found footage. It is the footage that Timothy Treadwell, a California native, filmed of the bears he took to living with in Alaska. Things were going great … until one of the bears ate him. The problem was that Treadwell had projected human emotions onto the bears and thus had opened himself up to being destroyed by them.

The documentary, directed by atheistic raconteur Werner Herzog, is a pastiche of the footage with Herzog’s haunting voice-over commentary. In one unforgettable scene Treadwell trains his camera on one bear that stares right back at him. It was the same bear that would eat him a few hours later. As the bear stares blankly into the camera Herzog comments:

what haunts me is that in all the faces of all the bears that Treadwell ever filmed I discover no kinship, no understanding, no mercy. I see only the overwhelming indifference of nature. To me there is no such thing as the secret world of the bears and this blank stare speaks only of a half-bored interest in food. But for Timothy Treadwell this bear was a friend, a savior.

We look at psychopaths as like us, but the reality is that where the question of human engagement is concerned they are more like that bear. They are master manipulators who freely use others for their own ends with impunity. Many of us have been the victims of a psychopath without even realizing it (Jag commented this week that he suspects a deceased family member was a psychopath).

In my next two articles I’ll be discussing the issue from two angles. To begin with, I’ll consider the problem of psychopaths within the church. This is an issue so important that I think it ought to be included in every seminary education so future pastors are trained to spot those evincing psychopathic behavior and are equipped to deal with it to protect their community. As I will explore in that article, with their mandate to love others and extend grace to them many churches are uniquely vulnerable to the exploitive wiles of the psychopath.

Finally, I’ll turn back to the deeper theological and philosophical questions that are raised by psychopathy. Are psychopaths culpable for their crimes? Are they capable of repentance? Are they made in the image of God?