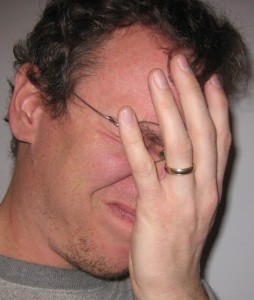 Back in November I awarded my first Face-in-Palme d’Or award. The award is intended “to honor the occasional real stinker [of a blog comment] which gets things wrong in a really big way. ” The winner back in November was “Dogmatic Daniel”, and his life has never been the same since.

Well I have exciting news. It is time to hand out the next Face-in-Palme. While the competition was tight, I am delighted to announce that the irrepressible Atheist Missionary pulled out ahead of the pack. The judges voting was unanimous. Here is TAM’s award-winning comment rendered in a lilac colored scratch and sniff font (go ahead, scratch the letters on your monitor; smells great, don’t it?) :

Randal, metereologists, physicists and biologists do not make bare assertions based on nothing more than the basis of testimony. Only theologians do that.

Lovely, just lovely. This comment’s place in the forthcoming 18th edition of Bartlett’s Familiar Quotations is all but secured.

It is important to appreciate the genius of this comment. There is just too much to criticize.

Consider first this: “metereologists, physicists and biologists do not make bare assertions based on nothing more than the basis of testimony.” What, like never? When a world famous physicist calls up his wife to ask where their son’s favorite Hulk action figure is and his wife tells him “It is in the toy bin” does TAM seriously believe that the physicist will not  at that moment tell his boy that Hulk is in the toy bin?

Maybe TAM means this: that these specialists never make claims based on the testimony of others in their respective fields. But this too is weird. A meteorologist from Toronto calls up his meterologist friend in Denver and the friend says “It is going to rain tomorrow in Denver”. According to TAM, the Toronto meteorologist could not and would not tell anybody it will rain tomorrow in Denver based on this testimony. What. seriously?

He can’t mean that. That too is silly.

Ahhhh, I think I see what is going on. You see, I’m a theologian. Perhaps  TAM thinks that is enough to make me buy his bare assertions based on nothing more than his own testimony.

Sorry, that too is silly.

But it is not all bad news. This is one time where being plain silly is a good thing because in this case it netted TAM his own priceless Face-in-Palme d’Or Award!

**Special thanks go to PDS for critiquing TAM’s comment and to the Kodak Theater for hosting the awards ceremony. (It will be broadcast on TBN and BET in early March.)