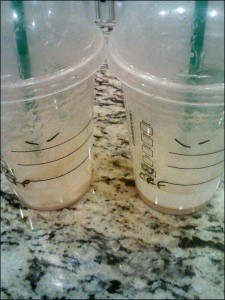 In the last month there have been several instances of racism against Asian-Americans which have gained national headlines. We’re not talking about lynchings here but rather racial slurs finding their way into mundane economic exchanges.  The most recent occurred when two men ordered drinks at an Atlanta Starbucks. Instead of putting their names on the cups to identify the customers, the barista instead simply drew eye slits (so-called “chinky eyes”). You can read more about the case here.

There are several things about this case that strike me.

How could the employee be this stupid to think that people wouldn’t notice a racist caricature like this?

Symbols are extraordinary things which wield great power. A simple cross with hooks on the end can conjure up the most horrifying scenes of death camp carnage. And two simple lines can be a slap in the face to two customers.

Think about it. How many Starbucks baristas do not harbor some prejudices?

How many bristle, however slightly, when a loud group of Chinese or South Asians enter the store? When an obese person orders a venti-sized frappuccino how many wish they could ask “Why don’t you hae a tall skinny latte instead?” How many roll their eyes impatiently when the homeless man counts out his change for a cup of coffee? Of course the point is not about Starbucks baristas per se. Countless customers are thinking the same thing. The real problem is with the legion prejudices that pretty much everybody holds. The fact that a “Chinky eyes” caricature makes its way onto a cup is appalling. But it is no less appalling to think how many of our prejudices are written in invisible ink.

Finally, I am struck by the extraordinary power possessed by a single corporate employee making 8 bucks an hour. Do you remember the public relations fiasco Denny’s suffered in the 1990s over the actions of some employees who expressed prejudicial attitudes toward certain African American customers? (Read about it here.) Denny’s ended up paying millions.

Now think about the repercussions that the actions of this single racist barista, the one stupid enough to draw his “Chinky eyes” in visible ink, will have on the entire corporation. Will there be a single lawsuit? A class-action suit encompassing thousands of disenfranchised Asian-American customers? A revision in the Barista 101 Training Manual to include a new section on racial sensitivity? It is hard to say. But it continues to amaze me how one foolish momentary act in a suburban Atlanta coffee shop can send out a ripple effect with potentially global implications.