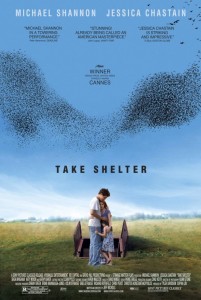 One day Ray Kinsella heard a voice in his cornfield, “If you build it, he will come.” And so begins the great American feel good story of a struggling farmer who builds a baseball diamond in his backyard. But what if Ray was waiting not for the arrival of a mysterious man but rather of a mysterious storm? What if he began pouring his limited resources into a storm shelter? What if the Hollywood ending was replaced by the growing suspicion that Ray had schizophrenia? If you made those changes (and a few more, including the shift from Iowa to Ohio) you’d have “Take Shelter.”

“Take Shelter”, a film written and directed by Jeff Nichols,  won the grand jury prize at Cannes in 2011. Ever since I’ve been waiting for it to receive the wide distribution it so deserved. Alas, it never did. And so I had to wait for pay-per-view.

It was worth the wait. In a world dominated by cinematic dreck like “Transformers”, here is a film with a burning intensity, a sense of stifling existential dread I haven’t seen since Kubrick’s immortal “The Shining”, and one of the most haunting dream sequences since like, ever (though a couple of the sequences in “Stir of Echoes” come mighty close). To top it off, the film has the boldness to introduce an ambiguity at the end to rival Bill Paxton’s serial killer in “Frailty”.

If you build it, he will come. So went the comforting refrain of “Field of Dreams”. Here the message is quite different: build it, because it is coming. Never has the line between insanity and prophecy been so blurred.