For the last two days I have been cognitively crippled by the clogged sinuses of a brazen cold. My current ability to string together meaningful sentences is about 20% owing to a reasonably healthy immune system and 30% due to Advil Cold and Sinus. (The other 50% is diet.) Still, I’m not back at 100% so I thought I’d blog on a little thought that has been in my head for awhile. 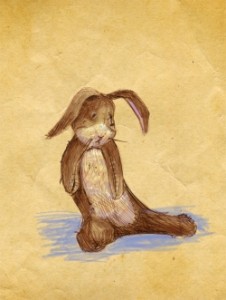 The thought relates to consumerism. The assumption commonly is that consumerism is the love of things, of material goods. It is, in other words, excessive attachment to material things. But William Cavanaugh proposes a different thesis:

What really characterizes consumer culture is not attachment to things but detachment. People do not hoard money; they spend it. People do not cling to things; they discard them and buy other things. (Being Consumed: Economics and Christian Desire (Eerdmans, 2008), 34)

I think Cavanaugh is right. Consumerism does not teach us to hold on to material goods. The focus is not materialism per se, but rather consumption. Meaning is found through acquiring ever more material goods.

I think of the famous and beloved story of the Velveteen Rabbit. The story tells us of this handsome stuffed rabbit toy that lived in a nursery with other toys. One day he had a conversation with an old toy, a skin horse (skin because it had its hair worn off; don’t be too macabre folks). The skin horse explained that if a toy is really loved by its child, it becomes real. And so it is for the velveteen rabbit. He comes to be loved by the boy. When the boy becomes terribly sick with fever the rabbit is there to love him back and help him recover. And when he has recovered, the bunny is taken to be burned along with other “infected” toys from the nursery. But before he is burned a fairy comes along and changes him into a real bunny because of the love his child had for him.

With that haunting story in my mind, I turn to my own daughter’s menagerie of stuffed animals. Over the years her affections have shifted regularly, not quite each time she got a new “stuffy”, but often enough that she probably has 6 or 7 such toys that have occupied the privileged place. If we live in a world of fairy magic, that is not enough time for any one of those stuffies to have been turned into something real.

And so it is, the constant acquire to attain more and more material things disengages us not only from the transcendent values and virtues of human relationship. It even disengages us from the material world around us, as each new material thing acquired becomes not an object to be loved despite its imperfections, but rather another stepping stone in an endless quest for material satisfaction.

Sadly, in the world of consumerism, the velveteen rabbit stays forever velveteen.