Unfortunately the stone axe’s role in Yir Yoront society was much broader and more significant than the missionaries had realized. The stone axe was crafted carefully by skilled initiated males in the society and was considered the most valued possession for an adult male to have. Consequently the axe served as a symbol of social demarcation and those who made it were highly revered as wise sages and uniquely gifted craftsmen. The process of acquiring an axe involved one in complex trading relationships facilitated at periodic tribal gatherings. This simple tool was not just an axe. It was an object of social cohesion for the entire Yir Yoront society.

Consequently, when the superior axe made the stone tool obsolete, the social cohesion that had long stabilized society began to evaporate. The complex trading relationships disintegrated and social bonds were weakened. With superior steel axes widely available the stabilizing points of social demarcation were lost. And the revered craftsmen saw their special status and skills become obsolete. People increasingly felt their society to be crumbling, they felt directionless, and suicide, previously unknown among the Yir Yoront, became an increasing social problem.

The story of the Yir Yoront reminds us that technological advance is often a trade-off. Fortunately that which is lost is rarely as extreme as in this sad case. And in many case there is no discernable loss. We can thank Robert Kearns for the intermittent windshield wiper and Jonas Salk for the polio vaccine without qualification. But in other cases there is a loss, and it is often difficult to calculate. Who knows what trade-offs may be involved in the mapping of the human genome? It is nearly impossible to anticipate them all but the dystopian futures of so much science fiction provide some unsettling possibilities.

I was reminded of this lesson last night as I took a trip into the past.

I visited a video store.

Like many people I stopped going to video stores a couple years ago (not long before the venerable Blockbuster chain and its Canadian rival Rogers Video closed for good). It was inevitable really. The missionaries of technological advance had introduced Netflix, Redbox and pay-per-view television. And in these seemingly modest steps yet another venerable cultural institution, the neighborhood video store, was consigned to obsolesence. 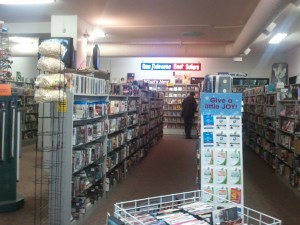 So it really jolted me when my friend suggested that we visit his neighborhood video store, a modest joint called “Videodrome”. And for the first time I began to reflect on some of the things I had lost with the advance of technology.

The first thing that hit me walking in the door was that distinctive video store smell that I’d forgotten: The mixture of plastic, berber carpet, popcorn and who knows what else. That was the first wave of sensory nostalgia. Next, there was the movie playing on the television monitor (just hidden behind the bags of popcorn in the picture). It was a black and white film and it provided an ideal soundtrack for the visit. Then I turned to the counter and saw an older gentleman who looked slightly bored but also amiable, knowledgeable, and perhaps just a bit quirky.

Did I mention that he looked a bit bored? Though it was a Saturday night there were only about a half dozen people milling about the aisles pensively scanning the racks of DVDs (and a smattering of VHS!). Apparently the weekend “rush hours” I remember from the past are no longer, even at the few remaining video stores.

Then I thought of Quentin Tarantino who famously laid the foundation for becoming a great director by working in a video store. It is a wonderfully romantic image. A local sage of the cinema greeting the regulars and diving into the stacks to offer  hidden gems for one’s viewing pleasure, getting into discussions over the Academy award nominees with customers as he rings up licorice and popcorn along with rentals and late charges. If Tarantino were starting out today he would probably just sit on his couch watching Netflix.

It was then that the sadness hit me. I’m no Quentin Tarantino.  And I never worked in a video store. But I grew up visiting them…

I remember back in 1984 standing in the video store with our babysitter trying to convince her that John Carpenter’s “Halloween” was not a horror movie but a documentary of Americana. (It didn’t work.)

Speaking of “horror”, I remember another occasion around the same time when my friend’s mom took us to the video store. When his hand settled on a video cassette of “Poltergeist” a wave of fear washed over me. But I steeled up my nerves and said “Cool!” with as much enthusiasm as I could muster. (In retrospect it wasn’t that scary after all.)

For about two years in high school I regularly rented from the local convenience store. Since I knew the clerk she often gave us a two for one deal (wink wink, nudge nudge). It was there that I discovered great cinematic moments which were inexplicably passed over by the Academy … like “Weekend at Bernies.”

During my time living in London my wife and I rented from a tiny little shop packed to the rafters with great films. In one of the most expensive cities in the world we had found a place where you could get two movies for a pound. It was there that we discovered countless great international films — British, Iranian, French. Alas, I still haven’t found them on Netflix.

Over the last decade I settled down into a comfortable suburban life back in North America and that inevitably meant Blockbuster. During these many trips I was introduced to a range of Barbie movies (courtesy of my daughter) and was coerced into buying Nibs and popcorn in the long Friday night line-ups. I also discovered that every Blockbuster seemed to have at least one Quentin Tarantino in training who could offer expert advice if needed.

Now as I stood just inside the entrance to Videodrome I realized that an entire part of my life had come to an end and I hadn’t even noticed. Netflix and Redbox and pay-per-view had certainly made life easier. They were technologically streamlined, efficient, and minimized human contact.

But at what cost? For the first time I was doing the calculation and I now realized that it was costlier than I had ever thought.

Sadly, I knew that I’d never get the neighborhood video store back. Like the buffalo that once roamed the great North American plains it was gone for good. But for this night at least I would grasp the cool, melancholy blade of my stone axe once more. 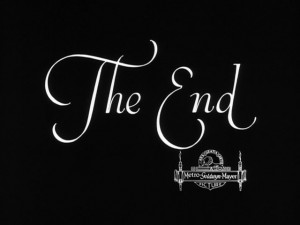