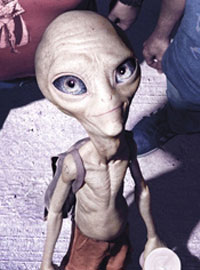 The other day I was listening to a broadcast of Justin Brierley’s “Unbelievable”, the UK’s top Christian radio program for the thinking person (I know, it’s a big fish in a small pond; but even if the pond were empty save this one fish, it’d still be a great fish). The program was talking about intelligent design and featured a discussion between Stephen Meyer and Keith Fox. Though Fox is a Christian like Meyer, he is also a critic of intelligent design, though I must say I found his criticisms less than compelling. The broadcast date was November 18, 2011 and you can listen to the program at iTunes here.

Anyway, at one point in the discussion the panspermia thesis came up (the idea that aliens seeded life on earth). The idea was (to my knowledge) first proposed by Francis Crick as a way to explain the incredible complexity in DNA without finding recourse to a divine intelligence. And so the thesis that intelligent life was seeded on earth.

What caught my attention was the erroneous responses that both Fox and Meyer gave to the hypothesis. Fox dismissed it with a wave of his hand (figuratively speaking; and perhaps literally too, though I’m only guessing since hand movement is tough to gauge through audio alone) with the quip that it simply begged the question of where the alien life came from.

However, that response assumes that alien life would also be from DNA or something equally complex. If it were so then Fox’s objection would obtain. But for all we know there could be alien intelligence out there which, if we were to put it under the microscope, would reveal itself to be reducibly complex. And it could be that that reducibly complex intelligent life seeded irreducibly complex life on earth. I’m not saying this is a particularly compelling thesis. Just that it doesn’t beg the question.

But it was Meyer’s response that really caught my attention. He dismissed the alien proposal as “preposterous”. In other words, silly, absurd, ridiculous. What caught me was bluntness of the assessment, lacking as it did any epistemological nuance. But the fact, as Meyer should surely recognize, is that preposterous is relative to a background set of beliefs. If you’re a theist like Meyer then the panspermia thesis might appear absurd. Need it be pointed out that if you’re an atheist then Meyer’s theistic view might well appear absurd.? (And of course if you’re a theist then a natural undirected process would appear absurd.) In other words, Meyer’s modeling of an attitude of dismissal toward a particular hypothesis as “preposterous” sets a bad precedent for any discussion of intelligent design.

So what Meyer should have done is refrain from any summary dismissal of the panspermia thesis. Leave it on the table as a viable option. Meyer may not grant it much plausibility. But that doesn’t matter. The point is to demonstrate a willingness to keep an open mind about any remotely plausible attempt to explain a very hard problem. Meyer failed to do that. And if that didn’t quite amount to cutting off the branch he was sitting on, it certainly came darn close.