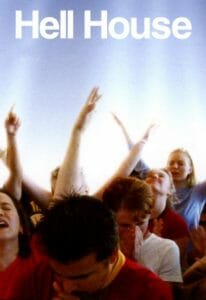 When I was a teenager I had an audiotape of evangelist and alleged exorcist Bob Larson visiting hell (or describing the experiences of somebody else who visited hell; I forget which). I lent the tape to a friend of mine, a headbanger who looked the part with his long hair and worn jean jacket with the Iron Maiden back patch. He listened to it in his bedroom. Lying there in the semi-darkness, listening to the evangelist drone on about the flames of hell and the unimaginable torments of those left to rot there, he quite literally was scared into becoming a Christian.

This kind of fear-based evangelism has long been a staple of evangelical preaching. Most of us have probably read (or at least heard of) Jonathan Edwards’ famous sermon of the First Great Awakening, “Sinners in the Hands of an Angry God”. The fire and brimstone preacher has long been a staple of North American evangelical piety. And even if such preaching techniques are not now as common as they once were, countless evangelicals still think of evangelism as the selling of fire insurance.

Consider then the 2001 documentary “Hell House”. The film follows Trinity Church, an Assemblies of God congregation in Cedar Hill, Texas in the year 2000 as it prepares for its tenth year putting on “Hell House”, a hard-hitting evangelistic outreach that files visitors (each paying $7) through several scenes with live actors playing out a series of grisly scenes, each involving a death from things like a botched abortion, AIDS, and suicide. Each scene is framed with a grim theme like “drug deal”, “rave”, “occult” and “suicide”.

Not surprisingly, the situation of evangelical Christians acting out very grisly scenes provides many moments of deadpan humor. For example, in one scene Mr. Cassar (who comes across as a deeply committed father of several children) is driving his kids to school when he tells his teenage daughter that he’d like to try out for the family violence scene. She expresses skepticism saying she finds it hard to picture her dad hitting and stabbing a woman. He agrees, it is a stretch!

Equally amusing moments follow. At one point the pastor asks his workers: “Y’all need red paint for the pentagram?”

During the auditions one young man says he’d like to act any part but the drug deal scene because that’s the only scene he’s acted in the past. He caps off the request with a vote of piety when he says he prays that the Spirit will lead them not to cast him in the drug deal scene!

After his rehearsal one man observes, “I’m playing the villain so if people are hatin’ me I did my job. Now I need to leave here and go to church.”

At another point a man says: “This is Jessica, my girlfriend. It’s kind of a neat story. We’ve known each other for a while but last October, uh, she was the, uh, victim in the rave scene and I was the death monitor of the DJ. And what was really neat, for a whole month I claimed her soul to hell and she died under my power. Just shortly after that we got together and everything’s been great since….”

And to cap it off, on opening night one guy says into his walkie-talkie: “Hello, Stephen? Would you look around in the control room in the portable and see if there is a knife that the occult people can use to cut the bride’s throat with?”

Just another day at the Trinity Church Assemblies of God!

The evangelistic outreach is definitely fear-based and decision-based. After the tour through hell groups are led into a room where a man (presumably a pastor or deacon) gives a short evangelistic message. After that, a door opens and he invites people to walk through and receive prayer to become Christians. He then begins a countdown from 5. When he reaches 1 the door is closed again. Everything is directed to getting people to make a crisis decision, and over the previous decade the film reports that 15,000 of 75,000 attendees have made such a decision.

Obviously, hell house is a well-intentioned effort and a massive undertaking. And the filmmakers seem to be quite sympathetic with the participants, especially Mr. Cassar who is caring for several children — including an epileptic child — since his wife left him for another man. The filmmakers are not interested in presenting caricatures. These are real people and even if one might question their methods, their intentions are good. (Good intentions, eh? But what’s that they say about the road to hell itself being paved with such as these?)

Let me make two observations about the limits of hell house. To begin with, it presents a very distorted and limited picture of sin and death. The house includes all the usual suspects for sin: dramatic scenes of people engaged in the occult, drugs, the “homosexual lifestyle”, abortion. But where are the rooms that depict the sin of failing to aid the poor or the sin of religious hypocrisy? And in the Sermon on the Mount Jesus preached that a person can sin in mind with no external action. So how about a room of a man who is simply sitting serenely on his couch and yet is sinning egregiously in mind? The point was well stated by Harry Blamires in his classic book The Christian Mind:

“But the Christian mind cannot accept the facile distinction made by the secular mind – reflected in public society – between the nation’s criminals and libertines on the one hand and her good men on the other. For the discerning Christian knows that a cunning or intelligent man may lead a life of almost diabolical pride, in which he strives in every moment to minister to the desires and vanities of his own inflated self—and yet may pass for a respectable, law-abiding citizen. Indeed he may rise to a position of eminence in the world by the persistent and subtle practice of the most calculated self-service. He may become a judge, packing off poor men to gaol [jail] with words of stern condemnation ostensibly reflecting the indignation of righteous men, and yet he may be, by virtue of a cancerous inner self-centredness, the greatest sinner, essentially the most evil man, ever to have entered the courtroom in which he sits—though its dock has accommodated a stream of murders, thieves, and perverts for the last fifty years.”  (p. 90, emphasis added)

“The Christian mind knows that, in any sorting out of the sheep and the goats, of the virtuous from the sinful, the forces of Heaven would slice through human society at an unexpected angle. The knife would cut firmly, but certainly not horizontally. What can we say or think of how it would separate the self-seekers from the fundamentally God-directed souls, except that it would certainly not leave all the convicts and perverts and public nuisances on one side, and all the cabinet ministers and business executives … on the other?” (p. 91)

This brings me to my second point. This woefully incomplete picture of sin and alienation is not only manipulative for its focus on a fear-based quick decision, but it also alienates many people who see through the distorting simplicity of the church’s moralistic framework. This is how one articulate young woman puts it to one of the volunteer workers:

“This is why people are so turned off to the Christian religion was that in there. It seemed that they’re stereotyping. If you’re gay you’re going to hell.” “You make it too cut and dried, too black and white. There’s no grey area. It’s like you don’t have that grey area and that’s what life is.”