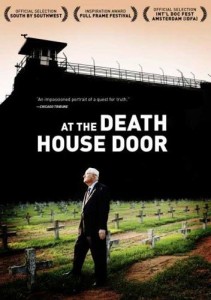 Yesterday I watched the 2008 documentary “At the Death House Door.” The film tells the story of Carroll Pickett, a chaplain at the notorious “Walls” prison in Huntsville Texas who, in the early 1980s, was recruited for being the chaplain for those condemned to death. His job was to stay with the prisoners from 6 AM to their execution shortly after midnight, to be their friend, spiritual confidant, and parent (moments before death one inmate, a man who had had only an alcoholic stepfather, pathetically asks “Can I call you daddy when I die?”). But most of all, Pickett is trained to make the inmate compliant and peaceably resigned to his fate, a fate which very often would include excruciating pain and a desperately slow demise.

Pickett was born and raised to be a hard ass (if you’ll pardon the expression). Only his daughter has ever seen him cry, once. For awhile he was impacted by his grandfather’s philosophy “hang em high, hang em fast.”

Pickett is no longer of that opinion however. Part of the problem involves the execution of the innocent — the film spends some time on the tragic case of Carlos de Luna — but the problem is deeper than that. Even if you could ensure only guilty men die, Pickett now wants nothing to do with it. He now sees capital punishment as a wholly brutalizing practice. It’s that sick mentality that allows a nearby cafe to sell “murder burgers” and for the star attraction at the prison museum to be “Ole’ Sparky”, a retired electric chair. The daughter of a murdered woman summarizes the problem when, following the execution of her mother’s killer, she poignantly observes: “My mother’s dead. He’s dead. That’s just two dead people”