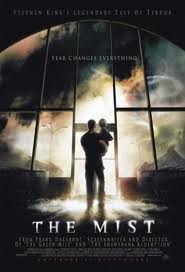 The movie “The Mist” tells the story of a mysterious mist that descends on a small town. Since it is based on a story written by Stephen King you know two things: (1) the town must be in Maine and (2) the mist must contain some real nasty thing-a-ma-jigs. As far as horror/suspense films go, “The Mist” avails itself of all the standard cliches and for that it earned its share of ire from the critics. But it is the ending that really angered a number of people. In the last two minutes the father, son, and two other people (none of their names really matter) are escaping south, or trying to, when they run out of gas (literally and, it would seem, figuratively too). So dad pulls out a gun and pops three of them in a string of mercy killings that would do Kevorkian proud. Then, his bullets spent, he settles down to meet his fate…

At that moment the mist begins to lift, tanks roll up the highway, and it becomes clear that (a) the man is now safe, (b) the misty creatures will lose, and (c) this is one cruel screen play.

Jack Mathews from the New York Daily News wrote: “The brutally ironic ending, I might add, won’t make anybody very happy about having chosen “The Mist” for their evening’s entertainment.” Kyle Smith of the New York Post complained that “the movie’s final moments were completely undercutting its supposed message.” And Chuck Wilson of the Village Voice snapped:

“All this would be disappointing, but not infuriating, if the film’s ending weren’t so unforgivably bad. Darabont abruptly abandons his master’s text in the movie’s final minutes, sending Drayton and his little boy a plot twist that wouldn’t be fair to reveal, but which is so distasteful and untrue to all that’s come before it as to be a slap in the face to characters and audience alike.”

What strikes one as especially mean-spirited is the horrible timing. Had the man survived after killing his son for two or three weeks and then the army won we would still count it terrible but it would no longer have that especially meticulous cruelty that the screenwriter wrote into the script.

Here’s a real life example. A short while ago a pastor told me of a young woman in his congregation — in her mid twenties — with no previous signs of illness who suddenly fell ill on her honeymoon. She returned home early, went to the doctor, and was diagnosed with an advanced form of rare cancer. Within a few weeks of getting married she was suddenly embarked on a viciously aggressive form of chemotherapy, the medical equivalent of the firebombing of Dresden.

It would be horrible enough for this young woman to be diagnosed with cancer. But to think of it occurring on her honeymoon offers an added degree of cruelty in the same way that a loving father who kills his son out of mercy a moment before such an act is no longer necessary seems an even more cruelly devised situation.

To sum up, it seems to me that the apologist is obliged to address not just the problem of evil simpliciter but also the problem of meticulously cruel evil.