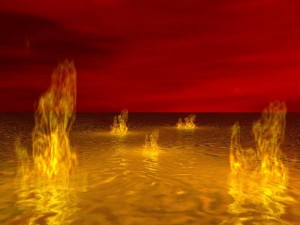 Sometimes you just can’t win. If you’re an irascible jerk then people don’t like you. But if you seek to be affable they still don’t like you. Case in point, consider the thread on John Loftus’ announcement of the book we’re writing together here.

In the thread John carried on with his typically immodest gusto about how he was going to destroy me completely and lay the celestial city to waste while he’s at it. So I joined in with some light-hearted quips about how John probably thinks he could also beat Eddie Van Halen at “Guitar Hero”, etc. Harmless stuff, right? Sure to win over a hostile crowd? But not everybody it would seem, for then a fellow named “Cipher” jumps in with a Grinch-like grumble: “I find all of this forced jocularity extremely unsavory.” Unsavory? What’s unsavory about attempting to lighten a potentially acerbic tone? Cipher goes on:

“It’s this attitude – “Oh, well, John’s going to hell, but we can at least have a few laughs before he goes.” Same reason I can’t abide it when Christians whine about civility. “Why, yes, of course you’re going to hell – but there’s no reason we can’t be civil to one another in the meantime.” I stormed off the de-conversion blog a few years ago and never went back, because a couple of young men attending a Calvinist seminary took just that attitude. They thought God had condemned me for eternity before I was born, but couldn’t understand why I found that offensive, and why I insisted upon taking it out on them.”

So Cipher had a bad experience with a couple Calvinists a few years ago and because of that my attempt to have civil conversation is suspect? Come on, do you carry the same prejudices toward Latinos, Republicans, and New Yorkers? How could somebody be so twisted as to read a couple jokes as concealing the anticipation that John and other atheists will one day be tossed into a lake of flames?

Let me make two quick points. First, Cipher has no idea what my eschatological views are. Second, one’s beliefs about hell are irrelevant anyways. Consider:

Al Atheist jokes with Chris Christian and believes that Chris is wrong and if he doesn’t change his views he will have wasted his life.

Chris Christian jokes with Al Atheist and believes that Al is wrong and if he doesn’t change his views he will have wasted his life.

I presume Cipher has no problem with Al’s jocularity. So why is Chris’s joking malicious? Why not believe that each individual jokes to lighten tension, develop relationships, aid everybody in their pursuit of truth, and simply because it is more fun to live a jocular life with the Whos down in Whoville rather than with that mean old Grinch up on Mount Crumpit?