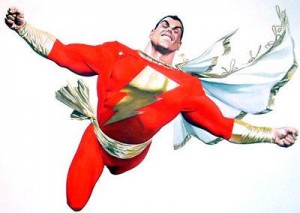 Don’t get me wrong. I’m not a comic book superhero geek. I grew up reading Archie comics. But nonetheless it has always seemed to me that Captain Marvel never got his due. And so this is the second time today I’ve made reference to this poorly understood caped crusader. I’m just trying to give the neglected fellow some long overdue attention, and what better way than to juxtapose his mug with a title like “What does the form of the good look like?”

The form of the good doesn’t actually look like Captain Marvel (in case you jumped the gun and thought I was working toward that conclusion). So what does it look like?

To answer that, let’s first ask another question: what is it?

But what is it that both share? It is the property of being red. When reflecting on this phenomenon of attribute agreement, Plato (and countless metaphysicians since) have concluded that there must be an abstract, mind-independent form or universal of redness which can be multiply exemplified. Thus both the Stang and the hero’s sweaty spandex suit share the property of being red.

Now consider two events. In event A Mother Teresa wipes the sweaty brow of a dying Dalit and gives him a drink of water. In event B Silver Bullet generously yields in traffic to allow a Honda Odyssey to pull in ahead of him. These two events also exemplify a property, the property of goodness or rightness. Philosophers like Plato reasoned that just as there is a universal red which can be multiply exemplified in different objects, so there is a universal form of the good which can be multiply exemplified in different agents or events.

But what more can we said about the universal of goodness ? What is it? A Platonist would likely say that it is an abstract, atemporal necessarily existent universal.  (While this might sound fantastic to the ear of the non-metaphysician, such theories are not pulled out of hats willy nilly but rather are reasoned to through careful reflection on the data available to us. My quick reference to the phenomenon of attribute agreement is only the barenest nod toward the reasoning that goes into such a theory.)

To posit a platonic form of the good (or a universal red) falsifies the standard definitions of naturalism (e.g. physicalism, scientism). That is a point which, you can imagine, I have been anxious to emphasize.

And so when we exemplify good in our actions we manifest however imperfectly and with all manner of finitude, something of what it means to be God. Is it any surprise that ancient theologians referred to the process of sanctification as “deification”, not that we become deities through being made holy or good, but rather that we are conformed to that perfect form of the good.

So I don’t believe that morality is simply rooted in divine commands. I think the genesis of moral value, virtue and obligation are all rooted in the divine nature, and more specifically the form of the good.