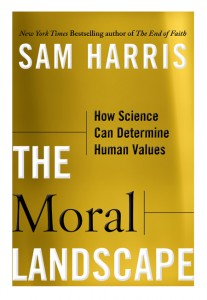 I don’t have time to read Sam Harris’ new book, but I do have time to watch him talk for twenty minutes, summarizing the main thesis in a TED talk. And so, thanks to Tory Ninja forwarding this link, I got a sense of the book’s thesis. But first a disclaimer: this is not a review of the book per se but rather a critique of the book’s argument insofar as it is accurately reflected in the TED talk in question.

First, here’s the good news. Harris’ book is a reflection of the utter bankruptcy of reductive attempts to explain away moral facts as mere non-cognitive values. As he indignantly asks, “How have we convinced ourselves that in the moral sphere there is no such thing as moral expertise…?” To answer, a secular world did this by accepting various reductive accounts of moral facts, values and obligations which evacutated them of their objective content. And Harris, to his credit, recognizes that this is indefensible.

But how do we explain the metaphysical ground of the good and right? Harris wants to have objective good and right but not the  non-natural meta-ethical ground of it (e.g. the form of the Good; the divine will; the diving nature) to which ethicists have historically appealed. In fact, Harris claims that we can explain objectively morality through science.

Harris starts with the traditional assumption that scientific information — “is” information we might call it — can never bridge the gap to ethical norms and values — the “ought” information:

Thus on this view, science cannot answer the question of what we ought to value and in what the good life consists.

All false, says Harris. Science can tell us about what is of value and in what the good life consists. And so he presents what is the core, ground level, bedrock thesis of his argument:

Values are “facts about the well being of conscious creatures.”

All ethical theories, in Harris’ view, are ultimately concerned with the flourishing of conscious organisms. And so, once we recognize this fact we can study the brain to understand how best to achieve this conscious flourishing.

If Jon Stewart presented this type of “argument” on “The Daily Show” I would have got the joke and let go with a good belly laugh. But that wasn’t Jon Stewart holding the microphone. It was Sam Harris. And this wasn’t the Daily Show. It was a TED talk. And Harris wasn’t laughing. And the audience looked serious. Harris continues:

“So what I’m arguing is that values reduce to facts, to facts about the conscious experience of conscious beings, and we can therefore visualize a space of possible changes in the experiences of these beings. I think of this as a kind of moral landscape….”

But how could Harris present this with a straight face? I might have sympathy if he were intending to be ironic but his deadpan delivery gives no hint of irony. If you haven’t caught it yet, here’s the glaring problem. Harris purports to show how science determines value and ethical reasoning. But in order even to begin he must first assume that value is rooted in the well being of conscious creatures. Harris doesn’t get this from science. So he’s baldly begging the question since his core criterion for ethical reasoning is not itself something established through science. Only if he first assumes a normative criterion for ethical reasoning can he begin to reason ethically.

It is at this point that the image of a karst landscape comes to mind. Without the metaphysical bedrock that grounds this intuition about the moral value of creaturely flourishing, Harris’ landscape is liable to collapse into a sinkhole once his audience recognizes that he simply has no scientific reason to value conscious creaturely flourishing.

So where does one get the metaphysical/moral foundation for ethical reasoning that Harris lacks? Not from science, obviously. It is something you accept based on a particular view of the world. But which kind? It is at this point that we need to go beyond Harris’ lame-duck attempt to heal the fact/value split to address a more fundamental split: that between nature and purpose. In the seventeenth and eighteenth century “Aristotelian” questions of telos or purpose were separated from questions of natural fact. Thus, the idea that human beings and other creatures could exist for anything was set aside.

The real way to have the bedrock necessary for moral discourse is not simply to assume without argument, as Harris does, the value of conscious flourishing. Rather, it is to return to this more fundamental division by returning purpose to the natural world and recognizing that creatures are for something, and that the frustration of those natural ends is a violation of the ethic of the creature, and that in the case of human beings the existence is moral, and the violation of the ethic of homo sapiens sapiens is thus immoral.

But to return the bedrock necessary to support the moral landscape requires us to return to a theistic worldview. And Harris, indoctrinated man-child that he is, is simply unable to do this. To note one example, he asserts that religious people learn their morality in a whirlwind. How can a presumably educated individual make such absurd comments? I presume he is merely ignorant of the natural law tradition of Christianity traceable to such biblical texts as Romans 1-2 and developed with great sophistication by theorists from Thomas Aquinas to John Finnis and J. Budziszewski. To say nothing of all the other highly developed, nuanced, and sophisticated theistic approaches to ethics, none of which appeal, as Harris presumes, to some type of individualized personal revelation of moral truth.

So Sam Harris is to be commended at least for recognizing the existence of a real moral landscape of hard rock which is very different from the gaseous values that have conditioned so much reductive moral discourse. But before he starts building his moral theories up, I recommend he take a closer look at the bedrock foundation.