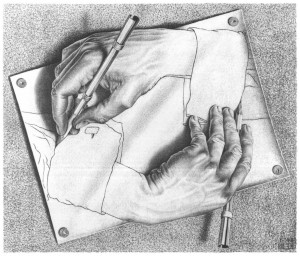 Let’s recap the case I present against Sam Harris in “The Sam Harris Sinkhole.” He purports to offer a scientific ground for ethics consistent with a naturalistic view of the world, but his whole argument depends on assuming that sentience is a morally norative criterion. Thus, he must assume the fact in order to explain it, a model case of vicious circularity.

SilverBullet helpfully provides the following quotes from Harris’ recent article in “The Huffington Post” as a means to rebut my critique.  Harris admits:

“we must smuggle in an ‘unscientific prior’ to justify any branch of science. If this isn’t a problem for physics, why should it be a problem of a science of morality?”

He then turns to develop an argument as to why this is not a problem after all:

“So, while it is possible to say that one can’t move from “is” to “ought,” we should be honest about how we get to “is” in the first place. Scientific “is” statements rest on implicit “oughts” all the way down. When I say, “Water is two parts hydrogen and one part oxygen,” I have uttered a quintessential statement of scientific fact. But what if someone doubts this statement? I can appeal to data from chemistry, describing the outcome of simple experiments. But in so doing, I implicitly appeal to the values of empiricism and logic. What if my interlocutor doesn’t share these values? What can I say then? What evidence could prove that we should value evidence? What logic could demonstrate the importance of logic? As it turns out, these are the wrong questions. The right question is, why should we care what such a person thinks in the first place?”

Let’s summarize this argument. Harris is saying it is okay that he begins by assuming that sentience is a morally normative value because we must assume other things, such as logical entailment, before we can reason at all. This is a form of parity argument then. “A” is okay. “B” is relevantly like “A”. Therefore “B” is okay too.

If this argument proves anything however, doesn’t it prove too much? For instance, how would Harris exclude a theist from beginning by positing the existence of God as a necessary starting point and reasoning from there? Oh wait, I know: Harris would appeal to insults and his facile and imperialistic assumption that he, and his small clique of secular western elitists, are the Universal Court of Reason. My, how deliciously self-serving that is.

But there’s a bigger problem afoot than mere inconsistency. You see the argument actually is a whopping non-sequitur. Let’s begin with the assumption that science can tell us something of what human flourishing is by studying the brain. Fine. That’s no skin off a theist’s nose. In addition, one must assume that sentient life is a normative ethical value. Fine again. This too is no problem for a theist. The relevant appeal of Harris’ argument is that we need to assume the normative ethical value of sentient life in order to learn from scientific investigation of the brain how to ensure that such life flourishes.

This brings me to the essential point: none of this is of any relevance at all to the metaphysical ground or genesis of such objective moral valuation to begin with. Let me repeat: even if Harris’ argument can be sustained, it doesn’t do what he wants it to do. It establishes only the milquetoast thesis that science can aid human flourishing. But it provides absolutely no insight as to why sentient life is a moral criterion to begin with.

And it is precisely for this reason that Harris’ assumption of the normative value of sentient life is not an example of a necessary starting point of reason but rather an instance of vicious, self-refuting circularity.