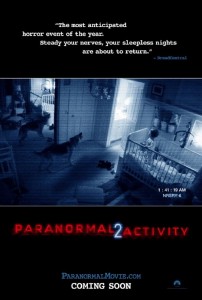 Watching “Paranormal Activity 2” last week left me impressed. It is a very effective film. The premise, in half a sentence or less, is that security cameras set up all over a house start recording some very unusual activity. Initially the father is confident that it can be explained by appeal to natural causes. For instance, a door slamming by itself is explained with appeal to a draft. But when all the cupboard doors spring open at once in the kitchen, draft no longer is sufficient. And when his wife is dragged down to the basement by an invisible hand, Toto I’ve a feeling we’re not in Kansas anymore. There comes a point when you need to go beyond the standard explanations to account for what those cameras are recording.

In our discussions about the objective metaphysical status of moral facts, the retort has occasionally come: “What about descriptions of x or y in the Bible?” “Can God make x true by saying so?” Et cetera.

Those are interesting questions in the same way that “Is it a poltergeist or a demon or perhaps an alien intelligence or some heretofore unknown telekinetic powers?” is worth asking with respect to the goings-on in the house in PA 2.

And likewise, the person who honestly apprehends the objective status of moral facts cannot respond “So what about when the Bible says x or y?” with a suitably incredulous posture as if doing so somehow makes the phenomena of moral facts no longer a falsification of naturalism.

We can discuss in what objective moral facts do consist later. But first we must concede that there are such facts and that this counts against atheistic/naturalistic views of the world.