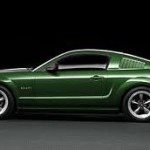 Peter Egan, a columnist for Road & Track, shares in one of his monthly articles about the obsession he developed with a 2008 Mustang at the local Ford dealership. Day after day he pined for this car, until he finally drove out to the dealership to buy it. In the column he provides the following rationale as motivation for his purchase:

“A few years back, I walked out of a doctor’s office after a health scare and immediately drove to a Harley-Davidson dealer and bought a new Road King I’d been looking at. Moments of mortal awareness are marvelous for clearing the mind and forcing you to buy neat stuff.” (Peter Egan, “Failure to Dodge a Bullitt,” Road & Track (August 2009), 32).

Incredible. I might have thought that a health scare (i.e. a brush with one’s mortality) would be adequate grounds for a reexamination of one’s consumeristic priorities. (Picture a materialistic Gordon Gekko’esque bonds trader who, after almost losing his life in the World Trade Center collapse, completely changes his value system.) But no, Egan is so far gone that apparently he sees no irony in his own statements.

And why should he really? If we are random byproducts of blind processes and there is no objective purpose for our lives except what we given them, then we really are free to choose what it means for us to flourish. Some of my readers have been incredulous when I have raised the picture of the cannibalistic serial killer and other degenerates who choose a radically different conception of flourishing. But we need not reach to such extreme (though real) examples to make the point. We need simply point to the average materialistic participant in consumer culture.

For Egan flourishing means spending his days riding his Harley and polishing his newly acquired Ford Mustang. I may find his choices superficial and misguided, but then that’s just because I have a different view of flourishing which is true for me but obviously not for Egan. So the person who denies objective moral facts has nothing to say to Egan apart from “Hope you get your Mustang” or “I would have preferred something else.”

But for a worldview like the Christian one in which it is an objective fact that morality is concerned with moving people from being self-centered to other-centered, the picture really is ironic and tragic.