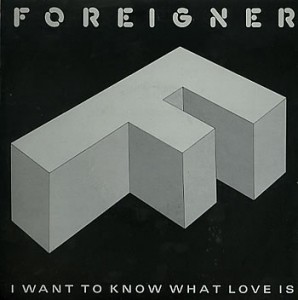 The critics never liked Foreigner much, but then their mullet-wearin’ Camaro-drivin’ fans never liked the critics much. And really, who could resist the infectious drive of an arena-grade power ballad like “I want to know what love is”?

Although Lou Gramm may have been asking what love is, I think he had a reasonably good idea. He knew, for instance, that you don’t wantonly inflict pain on those you love. Rather, you treat them with kindness and affection. Even though arena rockers may not be rocket scientists (though Tom Scholz comes close) they do understand the basics of love and hate, good and evil.

And so do the rest of us. How could we not understand, at least in broad outline, what a good and loving attitude is and what an evil and hateful attitude is?

This brings me to MGT2’s comment. It is well stated and a common rejoinder to my protest that certain actions could not have been commanded by God. MGT2 suggests the following:

“Could it be that our moral objections are the result of our insufficiency when it comes to understanding God’s acts from His perspective? I am not defending any of the morally objectionable events you mentioned. I am bothered by them and do not have any good answer, but I trust God. After all, the Bible tells us that the natural man cannot understand the ways of God.

“Could it be that we are trying to confine God’s acts to the boundaries of our finite intellect – the possibility, rationality and logic to which it appeals?

“So instead of choices a, b or c, a believer may have choice d. I do not think it is an appeal to mystery or anything like that because there are some things we will never understand this side of eternity.”

So to summarize MGT2’s point. It could be the case that at some points the good and right thing to do is to sacrifice cooing human infants to God. And the fact that we cannot see how this is in some cases good is due to our deficient moral formation.

I don’t have any rejoinder to the person who holds this kind of position (incidentally I don’t know that MGT2 does hold it since his statement of it is quite tentative). I mean, what could possibly be said to the person who says that sometimes infant sacrifice is the right and good and praiseworthy thing to do?

Well one thing could be said, I think. And this is it: accept that position if you must, but understand that it leads to a bracing, sweeping, engulfing and breathtaking moral skepticism. Here’s an illustration. I think my eye sight is good enough to drive so I go to get my eyes tested. But alas I cannot even see the first danged giant letter on that chart (the giant ‘E’). If I can’t see the first letter, the very biggest letter, then I have good grounds to believe I can’t see any of the other letters either. I can’t see. Period.

Now think about your moral beliefs. Among the strongest beliefs we have, I would submit, is that it is a heinous act for a father to behead his son in the name of God, just the kind of case I noted in my last post. But if MGT2’s suggestion is correct then sometimes that is just the thing to do: it is right, good, and holy. And if that is the case, despite our deepest, overwhelming intuitions to the contrary, then we really cannot even see the single largest letter on the morality chart, let alone any of the subsequent ones. We are, in short, morally blind.

So accept that killing infants in the name of God is possibly praiseworthy if you must, but then accept that we really have no clue at all what is good and evil. And that is no small consequence.