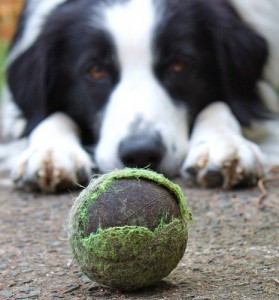 Silver Bullet asked: “Randal, Let me pose a scenario to you:

The Christian god apparently once commanded that someone be stoned to death for picking up sticks on a Saturday.

Was this objectively moral? If so, how?”

AcesLucky has since fixated upon this question like a border collie fixated upon a sheep (or, in suburbia, a tennis ball). So AL keeps coming back to it, even after I explained that it is an irrelevant question for the debate here. It is a classic case of a red herring. And we all know what that is, don’t we? A stinky fish you leave on a trail to throw the dogs off the scent of the fox. In other words, a strategic diversion from the main issue when you’re losing a debate.

And that’s what we’ve seen here. You’ll notice that when debating my atheist friends on ethics I have not bothered to bring up issues like free will or the definition of naturalism or the epistemic status of atheism. We prescind those issues and focus on one single topic. “Is morality objective and if it is then does this appear to falsify naturalism and atheism?” I have provided arguments that answer both these questions in the affirmative. So what does AL do? Become fixated on a single tennis ball verse. Now if Aces Lucky and the rest of this motley crew (not to be confused with Motley Crue) will concede that (a) morality is objective and (b) this fact is inconsistent with naturalism and atheism, then at last we can get on to more specific questions like the claims about what a deity commanded in a purported divine revelation.

Just so AL knows, Christians have a range of responses to this type of question. Some would argue consistently that this is moral because it arises from a divine command. One could also appeal specifically to a consequentialist ethic to justify the command. (Robert noted both these already.) But that assumes that the report actually happened. Unfortunately AL, not all Christians accept every report in the Bible as being inerrant. Other Christians would agree with Robert Gressis. This isn’t a moral action. But they also don’t believe the Christian God ever commanded it.

So what value would there be in me entering those debates? At best you would get from me one more opinion among the many that Christians hold on such matters. My concern rather is to focus on those things on which Christians all agree and argue from there. As an apologist I argue for big tent Christianity or, as C.S. Lewis would have it, mere Christianity.