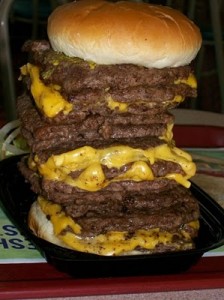 Every couple months a church I know puts on a social event called “Men and Meat” where all the chaps in the church get together, consume copious amounts of meat and, er, beat their chests? The event reflects a troubling notion that masculinity is tantamount to a machismo that, among other things, is expressed in an absence of compassion toward other sentient life forms.

Contrary to such events, I think that Christians actually have a serious reason to consider not only limiting their meat intake but even abstaining for periods from meat altogether (just like in the good old days when Lenten fasts actually meant something). Here’s an argument to that end:

(1) A Christian eschatology (as opposed to a platonic eschatology) is committed to the view that the material world will be redeemed at which point God’s peaceable kingdom will be established.

(2) Since the creation includes both flora and fauna, it is reasonable to believe that the peaceable kingdom in the restored heavens and earth will include flora and fauna.

(3) This coming peaceable kingdom will witness to a cessation of predation, death and carnivory.

See for instance Isa. 11:6, the familiar prophetic picture of harmony being restored within creation.

(4) Therefore, creatures in this new kingdom will either (a) be vegetarian or vegan or (b) will only eat meat to the extent to which it was not derived from a sentient lifeform (e.g. it could be meat grown in a petri-dish, although meat-flavored tofu might be just as good).

Note that I didn’t say all creatures will be vegan, but only that no creatures will die to serve as food for others. So if we eat meat it will not be as a result of killing anything.

(5) Christians ought to live as prophetic witnesses for God’s coming peaceable kingdom in which there will be no eating of meat from sentient organisms.

(6) Therefore, as prophetic witnesses for God’s coming peaceable kingdom Christians ought not to eat meat from sentient organisms now.

This doesn’t necessarily oblige Christians to go vegetarian or vegan, but it does suggest that they ought to contemplate seriously at the very least a limitation of their consumption of meat products as a prophetic anticipation of that coming peaceable kingdom.