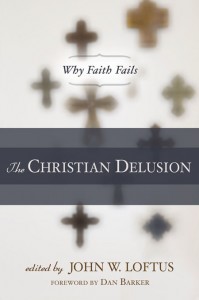 Chapter 7 of Loftus’ edited volume The Christian Delusion is by Loftus himself and is titled “What we’ve got here is a failure to communicate.” In the essay Loftus intends to provide the reader with “a brief romp through the Bible with an eye on the failure of a perfectly good omniscient God to communicate (or reveal) his perfect will to believers.” (181) That’s the topic. Here’s the actual thesis: “My claim is that God did a woefully inadequate job, especially since he’s supposedly omniscient and knows how ‘sinful’ people such as us could misunderstand his words.” (181-2) Loftus refers to this “woefully inadequate job” as the “problem of miscommunication”. To sum up the argument, there has been so much disagreement concerning what the Bible means that it could not have been the product of a maximally capable (read: omnipotent) and perfectly good author.

After having set up his claims, Loftus provides a bunch of examples of texts around which interpretive problems swirl (or perhaps fester, or maybe lurk) and leaves the reader to conclude  that no divine author would have produced such a text.

Here’s the basic problem with this fanciful argument. I call it “the problem of the brilliantly subtle classic.” To illustrate, let’s think of two classic anti-war texts. The first is Dalton Trumbo’s Johnny Got His Gun. Trumbo wrote it in the aftermath of WWI as a powerful indictment of war. (A film was produced based on the book which came out in 1971, and Metallica used footage from that film in their video for “One”, just in case you were wondering but were afraid to ask.) Trumbo’s book is a classic American novel and one of the most powerful attacks on war and its aftermath ever penned. It was so powerful in fact that Trumbo actually appealed to his publisher to cease publication of the book during WWII for fear of undermining the war affort against the Germans and Japanese (a decision he later regretted). So two thumbs up for this clear, unambiguous, anti-war novel.

Next up, The Red Badge of Courage. In this case things are very different. Literary critics debate yet today whether the book is actually an anti-war novel or whether it offers a sympathetic portrayal of the maturation of Henry Fleming in the crucible of battle. You see, the way the text reads, straightforwardly, it suggests if not outright proclaims that Fleming became a man in the war. And thus the book seems to offer a positive view of combat. But I’m with those other critics, the majority in my estimation, who say “Bullocks! The book is ironic and as deep, decisive and profound an anti-war tract as Trumbo’s.”

With that background, imagine somebody entering the fray by asserting that whoever wrote The Red Badge of Courage could not by definition be a great author because they had simply failed to communicate. You know how we would respond to such a claim? With a heady session of puzzled head scratching. Please tell me by what criterion you can judge that Red Badge could not have been written by as brilliant an author, with as deeply anti-war a sentiment, as Johnny Got his Gun. When you can do that, I might take your argument against the Bible and its divine author seriously. But until you can do that, well you’ve simply failed to communicate.