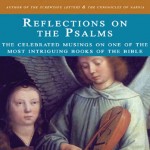 There is one straightforward way to deal with these texts which is shared by many non-Christians (including many atheists reading this blog) and even some Christians who hold a non-inspirational view of the Bible: turf them; get rid of them; cast them off. Is there another approach however? One which does not attempt to “baptize” the moral voice of the imprecatory psalmist and yet can recognize these texts as having an inspired authority within the canon?

Indeed, there is, and one finds it in C.S. Lewis’ treatment in Reflections on the Psalms. To begin with, Lewis makes a refreshing point:

“[W]e must not either try to explain [these cursing texts] away or to yield for one moment to the idea that, because it comes in the Bible, all this vindictive hatred must somehow be good and pious.” (22)

In other words, granting the texts a place in an inspired canon does not mean we need to accept the moral voice of the psalmist. Lewis continues:

“The human qualities of the raw materials show through. Naivety, error, contradiction, even (as in the cursing Psalms) wickedness are not removed.” (112)

Yes, Lewis does not shy away from calling the voice of the imprecatory psalmist against his enemy to be wicked. For those of us who share Lewis’ intuitions, this is a breath of fresh air. But then in what sense is this inspired, God-breathed, revealed literature? Lewis explains:

” The total result is not ‘the Word of God’ in the sense that every passage, in itself, gives impeccable science or history [or, presumably, morality]. It carries the Word of God ; and we … receive that word from it not by using it as an encyclopedia or an encyclical but by steeping ourselves in its tone or temper and so learning its overall message.” (112)

It is precisely at this point that many Christian conservatives have done the Bible a great disservice by thinking that recognizing the inspired authority of scripture means that we need to accept the truth of every proposition uttered by every human author and approved by every human redactor in the long history of the text’s formation. But that is not the way to read a text or its authority. To note the illustration I have made previously, you don’t respect the authority of The Brothers Karamazov by attempting to affirm the equal truth of every statement by every character in the book. Ivan’s atheism is irreconcilable with Alyosha’s Christian piety. And yet this conflict hardly means that Dostoevsky was somehow inept in including both voices in his book.

By the same token, the Christian should not attempt to reconcile irreconcilable voices in scripture. And much of what the imprecatory psalmist says is irreconcilable with other texts in scripture. For instance, his claim that God delights in the death of the wicked (Ps. 37:13) is in direct contradiction to Ezekiel 18:23. And the psalmist’s hatred of the enemy (Ps. 11:5; 139:21-22) is in direct contradiction to the words of Jesus in this pivotal section of the Sermon on the Mount:

“You have heard that it was said, ‘Love your neighbor and hate your enemy.’ 44 But I tell you, love your enemies and pray for those who persecute you, 45 that you may be children of your Father in heaven. He causes his sun to rise on the evil and the good, and sends rain on the righteous and the unrighteous. 46 If you love those who love you, what reward will you get? Are not even the tax collectors doing that? 47 And if you greet only your own people, what are you doing more than others? Do not even pagans do that?” (Matthew 5:43-7)