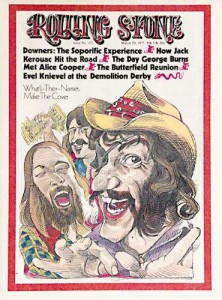 I just had an existential moment in an elevator. And no, it was not after viewing Shyamalan’s (producer) new film “Devil” (featuring a few people trapped in an elevator with the devil).

So here’s the scene. I’m speaking in a conference at Calgary and as I was riding the elevator up after my morning breakfast a poster on the wall announced that “Dr. Hook” was going to be performing at the nearby casino for New Year’s Eve.

Dr. Hook. Playing at a casino.

It made me think of their old hit (a song released the year I was born), “The Cover of the Rolling Stone.” Like Joe Walsh’s peerless classic “Life’s Been Good” it was intended as a satirical jab at the music/entertainment industry and its pretensions of profundity. Imagine how pathetic the image of one’s life goal being to get on the cover of some entertainment/music magazine.

My favorite moment is the line about how the artists shamelessly whore themselves out while on tour, reducing the platonic transcendentals to a means to make a quick buck: “We sing about beauty and we sing about truth at ten thousand dollars a show.”

There was a day when “Cover” climbed the charts and was regularly cranked on the 8-tracks in Mustangs all over the country. Not surprising. Not only did “Cover” offer a powerful evisceration of celebrity culture, but it did so with incisive wit while being very catchy and very, very funny.

Yet, as I stood there looking at the poster announcing aging rock stars playing a New Years gig at a south Calgary casino, I couldn’t  help but wonder: can they still pull in ten grand a night (even in 2010 dollars)? Alas, suddenly “Cover” didn’t seem so funny anymore.